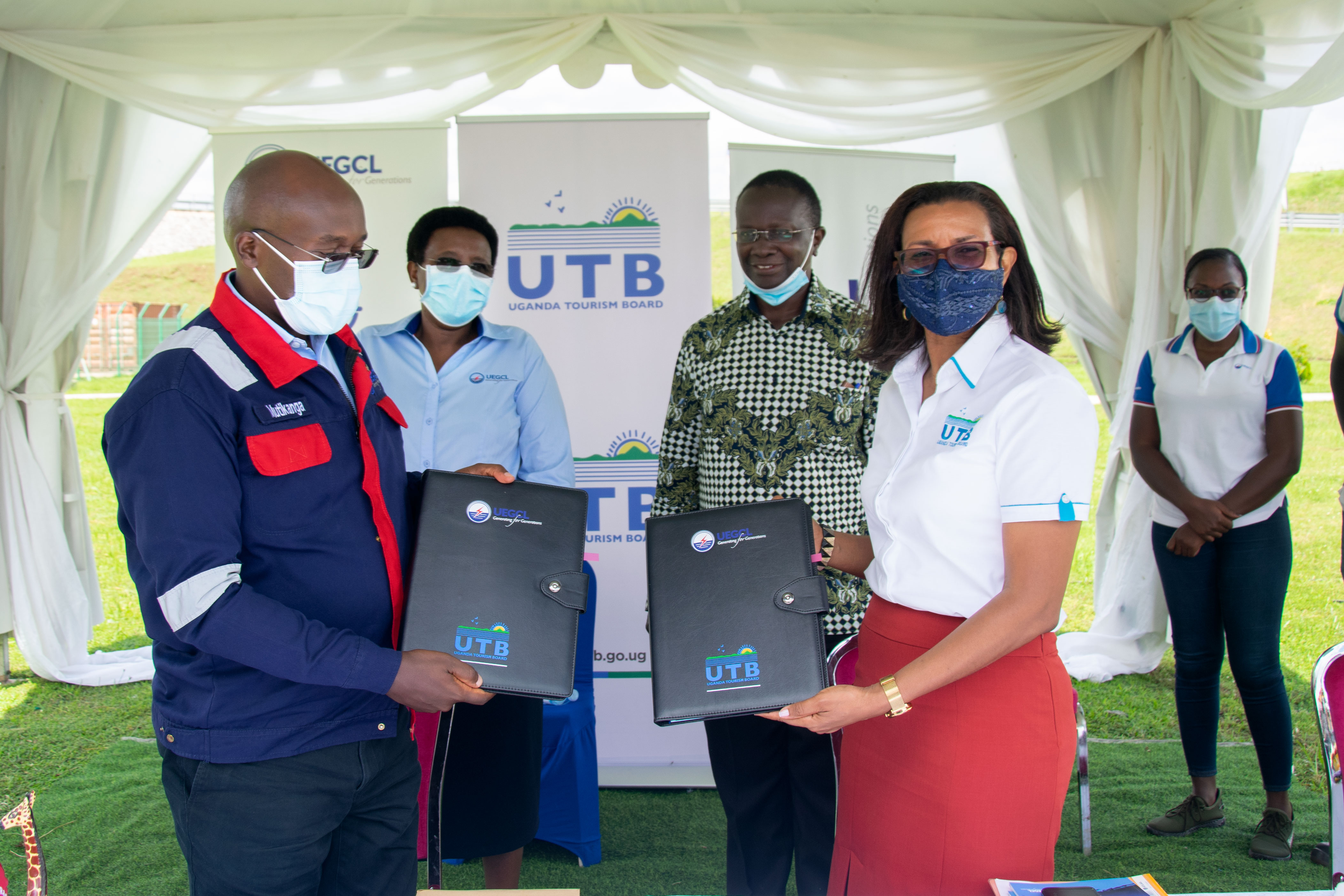 Isimba which was commissioned on 21 March 2019 and Karuma which is expected to to be commsioned June next year, are all owned by Government of Uganda and managed by UEGCL.

This MOU shall run for three (3) years from the date of signature. Some of the tourism products/activities being considered for development by UEGCL at the two dams include:

Speaking after the singing, Lilly Ajarova, the Uganda Tourism Board CEO thanked the management of UEGCL for picking interest in tourism and for reaching out to UTB to form this value-adding partnership.

“This MoU marks the beginning of an important journey for Uganda. When brought to fruition, the successful development of Karuma HPP and Isimba HPP into tourism sites will further diversify our tourism portfolio and therefore contribute to our core objectives i.e., sustainably increasing the volume (numbers) and value (earnings) of tourism to Uganda and by extension, Ugandan households, and livelihoods, through the creation of jobs and increased tax revenue’’.

“The diversification and promotion of tourism products beyond wildlife tourism to include among others, religious, cultural, culinary (food) and now infrastructure tourism, is very important to us as a sector and certainly as UTB. That is why, in our Strategic Plan 2020/21-2024/25 - UTB has prioritised collaborating with tourism site owners, the private sector and other MDAs to develop and package diversified tourism products to prolong the length of stay at a destination, thereby increasing tourism earnings,” said Ajarova. especially for the domestic market.

Dr. Eng. Harrison Mutikanga, speaking on behalf of UEGCL said that the MoU is in line with UEGCL’s Five Year Strategic Plan (2018 -2023) that among others focuses on the key objective of enhancing its business portfolio.

He intimated that utilization of the vast hydropower assets as a Tourism product will go along way in unlocking the infrastructure tourism potential in Uganda. This is premised on the fact that the hydropower stations have unique features both on the surface and underground.

As UEGCL, we pledge total commitment to the partnership, .said MUtikanga.

Hon. Daudi Migereko said that the MoU is part of UTB’s strategic cooperation agenda with key public, private and non-profit agencies and organisations whose work has a direct impact on tourism.

“In line with this partnership strategy, UTB has already inked a number of MoU’s with agencies such as Uganda Airlines, Uganda Communications Commission (UCC)  and the Federation of Uganda Football Associations (FUFA) to promote Brand Destination Uganda. Other than the government, UTB has severally collaborated with the private sector, cultural and religious institutions to develop, package, profile and market several tourism attractions and assets to the domestic market,” he said.

A recent World Bank study— Statistical and Economic Analysis of Uganda’s Tourism Expenditure and Motivation Survey 2019 established that adding one additional night to all Ugandan tourists has been found to directly add USD67 million to tourism industry earnings or USD166 million in direct and indirect earnings, an equivalent of between 0.3 per cent and 0.7 per cent of GDP.

The same study reported that every USD1 spent by a foreign tourist generates an average of USD2.5 of GDP- both directly and indirectly along the value chain. This compares well with the USD 2.3 of GDP generated per USD1 earned from traditional exports from Uganda.

ABOUT UGANDA TOURISM BOARD (UTB)

Created by the Tourism Act (2008), Uganda Tourism Board (UTB) is the official Government of Uganda’s destination marketing organization for Destination Uganda, the Pearl of Africa. UTB exists to sustainably promote Uganda as the most preferred and competitive destination for tourists and tourism investments in Africa. By working with stakeholders in the tourism sector to market Destination Uganda while encouraging investment, education, training and research as well as developing and monitoring standards in the tourism sector, UTB has since its inception, 13 years ago, grown the number of tourist arrivals by 78% from 844,000 in 2008/09 to 1,500,000 in 2018/19. This is slightly above global growth rates of 63% in the same period. As a result, sector foreign exchange earnings have nearly tripled, growing by more than 171%, from US$590 million to US$1.6 billion in the same period. Today the tourism industry, directly and indirectly, creates 667,600 jobs, 77% of whom are youth aged18-30 years and accounts for 7.7% of GDP.

Uganda Electricity Generation Company Limited (“UEGCL or the Company”) was incorporated in 2001 initially with the main objective to take over as a going concern the generation activities of the now defunct Uganda Electricity Board (UEB) together with all or any part of the property, assets and liabilities associated with it as was transferred to the Company by UEB in accordance with the Public Enterprise Reform and Divestiture Act. These assets transferred to the Company from UEB were principally the 180 MW Nalubaale and 200 MW Kira Hydro Power Stations located in Jinja.

The objectives of UEGCL were then expanded to include project development including development of Hydro Power Stations and other renewable energy projects. In this regard, the company is the implementing agency for the generation component of 183 MW Isimba Hydropower station and 600MW Karuma Hydropower Project with the mandate to deliver the projects within the cost, time and specified scope/quality. UEGCL is also developing other small Hydro Power stations and renewable energy plants and plans to do more in the
future.

This may be broken down into the following objectives;

“Known as the “Pearl of Africa,” Uganda is located in East Africa and offers some of the continent’s most diverse wildlife viewing, dramatic landscapes, and immersive cultural experiences and warm people and hospitality. Uganda is home to more than half the world’s population of endangered mountain gorillas and trekking to observe these gentle giants in Bwindi Impenetrable Forest is one of the world’s top bucket list travel activities. Safari opportunities abound in savanna, forest, and wetland settings throughout 10 national parks, where visitors can come face to face with “The Big Five + 2 ” – lion, leopard, rhino, elephant, buffalo, chimpanzee and mountain gorilla– as well as giraffe, zebra, hippopotamus, crocodile, and more than half of all bird species found in Africa. Among Uganda’s extraordinary natural attractions are the snow-capped Rwenzori Mountains; expansive Lake Victoria, which forms the source of the Nile River; and Murchison Falls National Park. For more information, please visit; www.visituganda.com”