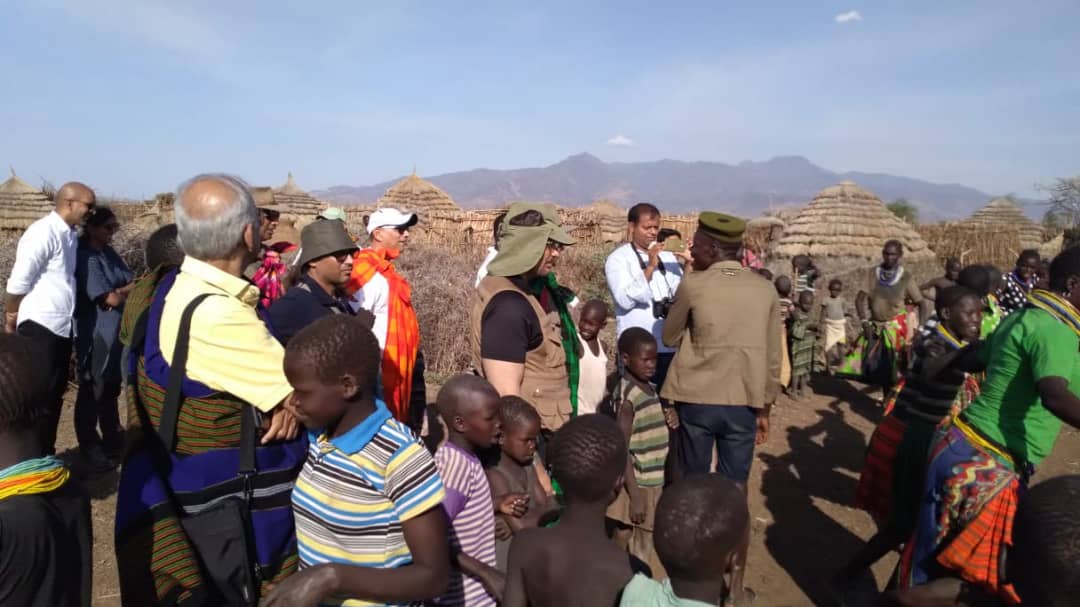 Kampala, March 4, 2019 – Having successfully completed an eight day tour of Uganda, a delegation from India comprising Bollywood stars and members of Travel Agents of India (TAFI) has today, Monday March 4, 2019 flown out, full of praise for the country’s rich and numerous attractions.

The group, led by Bharat Dabholkar, a distinguished film director, actor, writer and advertising guru, arrived in the country on Wednesday February 28, 2019 and almost immediately flew out to Kidepo National Park.

The team started off with a game drive and sight-seeing, giving them just a glimpse of the diverse wildlife in Uganda before proceeding to meet the Karimojong in their indigenous homesteads, the Manyatta.

The team also went gorilla tracking at Bwindi, visited Queen Elizabeth National Park and also enjoyed a boat ride on the Kazinga Channel, among other activities.

As they concluded their Ugandan visit, the team met President Yoweri Museveni yesterday at State House Nakasero where they discussed several issues.

The President urged them to encourage more tourists from India to come and experience the beauty of Uganda. He also said that linkages between India and Uganda have the potential to boost trade and investment.

Dabholkar, who has directed and starred in over 17 Bollywood films promised the President that they would promote Uganda as a tourist destination for Indians and also as a location for filmng Bollywood movies where Ugandans will participate.

He also stated that they will bring big film tourists to Uganda saying that film tourism will be a big deal.

Asked how his Uganda visit was, Dabholkar couldn’t hide his excitement, saying he would gladly jump onto another opportunity to visit Uganda.

“We came to Uganda to also experience the numerous stories we had been told about this place (Uganda) and to be honest, this is an extremely beautiful country. There’s a lot for one to take in here and I think I would need another trip to experience more of this,” he said.

Dabholkar was particularly excited about the Gorilla tracking experience and the Manyatta cultural attributes.

He noted, “Niche tourism with special package like the Gorilla tracking is very easy to sell and for our team this is a take home package for all.”

Other members of the delegation included; Shobanadri Yarlagadda, lead producer of Baahubali, a famous trilogy in Bollywood cinema, accompanied by his spouse Lakshmi Yarlagadda and Prasad Devinemi who helped co-producer the same film.

Also in the team was Veena Patel Sandeed, owner of Veena Travel, a Mumbai-based Indian tour company specializing in budget travel packages, Karad Anand, Head of Relationships and Supplier Management of Cox and Kings, a famous global travel agency with an Indian base.

Sumit Chaturvedi, an Executive Producer at India’s World Is One News (WION) global channel who was part of the delegation disclosed that most of the footage attained from the visit will be featured in a televised program offering, which will be free advertising for Uganda tourism industry.

Grace Akello, the Uganda High Commissioner to India, while welcoming the delegation to Uganda, stated that the visit aimed at unmasking Uganda's tourism potential, opening up the space for newer opportunities and for the film stars onboard to spot out potential sites for possible film shoots.

“This visit paves way for the possibility of local film makers working with this world-class film giant in southern Asia, to promote Uganda,” Akello said.

Uganda has in recent years become a haven for the production of internationally acclaimed movies. Hollywood blockbusters such as Queen of Katwe, The last King of Scotland, Victory at Entebbe, 7 Days in Entebbe, Mississipi Masala starring Denzel Washington, are some of the movies to have featured Uganda.

Adding Bollywood onto that portfolio would be a huge steal given the global appeal this burgeoning Asian movie industry has gained.

The interests of TAFI in this tour were equally beneficial for Uganda. Being a federation of all Indian travel agencies, this conglomerate of India’s travel holds the key to Uganda’s tourism prospects among the burgeoning Indian middle class. TAFI’s basic mandate is to look after the interests of its members, but it has the broader mandate of linking these members with the global travel industry.

The team’s visit was as a result of cooperation between Uganda’s Mission in New Delhi with government tourism agencies; Uganda Tourism Board and Uganda Wild Life Authority; as well as the private sector.