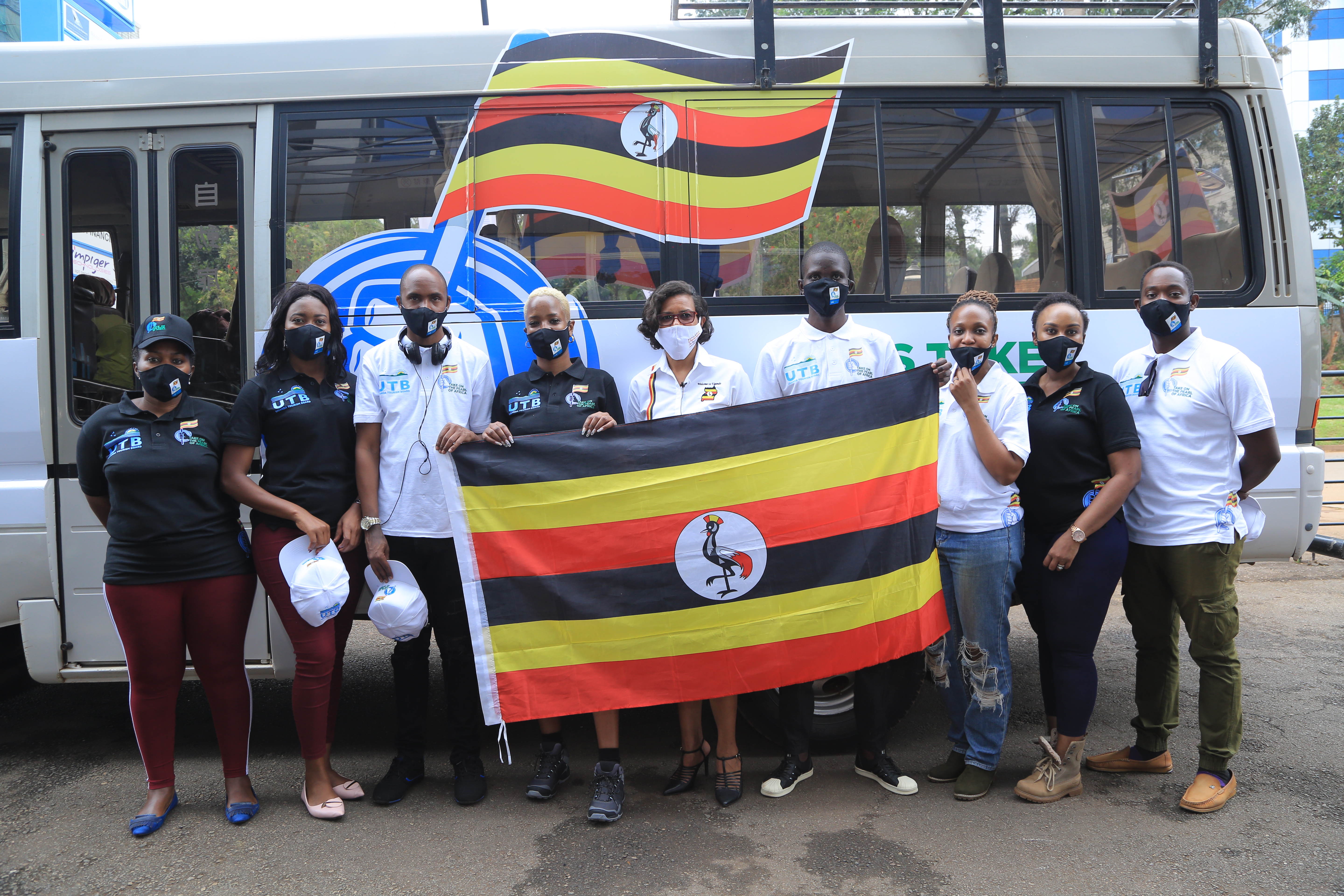 Kampala, Uganda 18th Sept 2020 - The Uganda Tourism Board has today, flagged off Dominic Tugume who emerged out the 1st lucky winner for ‘’Take on the Pearl of Africa’’ digital led domestic tourism campaign to Mbale, Eastern Uganda.

Launched a week ago, the ‘’Take on the Pearl of Africa’’ Digital led domestic Tourism Campaign witnessed Dominic emerge out first winner on Tuesday this week as he will be exploring Uganda’s beauty in the Eastern part of the Country throughout this weekend starting Friday till Sunday.

Excited Tugume won his maiden trip after observing all protocol directed to be followed as a rare photo of Sipi Falls -the first tourist attraction was posted on Uganda Tourism Board Social Media platforms following last week’s earlier stated terms and conditions participants were entitled to follow for a chance to win a trip to the Country’s prized tourism sites and attractions while they leverage on the opportunity presented by the Covid-19 pandemic.

This week’s first solo winner will traverse tourism sites and attractions in Eastern Uganda as these will include Sipi Falls in Kapchorwa and those surrounding Mbale City in the company of Ugandan Celebrities including city Comedian Alex Muhangi of Comedy Store Uganda and Radio Personality and Actress Cleo Patra Koheirwe and Model, Natasha Sinayobye.

The already thrilled Dominic Tugume couldn’t hold excitement to ’Take on the Pearl of Africa’’ during a zoom call last Tuesday as City comedian Alex Muhangi congratulated him upon the opportunity presented by the domestic tourism digital led challenge that will see him enjoy an exhilarating trip.

Speaking at the flag off ceremony, UTB Marketing Manager – Claire Mugabi noted that the campaign is aimed to revive the Country’s tourism sector through promotion of domestic tourism so as to encourage many Ugandans to visit the Country’s prized tourism sites and attractions that are situated in the different parts of the Country.

During the call, Dominic revealed of his excitement to take on the adventure as he said, ‘’ I am immensely dominated by excitement being the first winner for UTB’s Digital led domestic tourism campaign, I am really ready to take on the pearl and being a resident of Kampala who had no chance to travel for adventures given the costs and the Covid- 19 situation that confined us in Kampala alone, here comes the opportunity I have always wanted to travel upcountry for a memory lane excursion.

Dominic further revealed that upon receiving news from friends who saw him posted on the Visit Uganda social media platforms as they congratulated him before he even knew it, he was taken up by tears of joy and can’t really wait for Friday to drive through the weekend exploring Uganda’s natural endowers.

However, all participants opting to take part in the ’Take on the Pearl of Africa’’ Digital led domestic tourism campaign are urged follow keenly on the dynamics of the challenge for a chance to win part of the 8 trips across Uganda as 2 lucky winners will be selected every Tuesday of the week for travel between Friday to Sunday starting this September till November as 16 lucky winners will stand opportunity.

Mechanics under the Digital Activation

UTB will have a winner each week over the next 8 weeks. Winners will be announced at the beginning of the week and shall take their trip over the weekend; Friday to Sunday. What is more important to note as well is that UTB will not award the 2 winners but there will be a lot of giveaways, discounted accommodation and travel packages rates to enjoy in the course of the campaign.