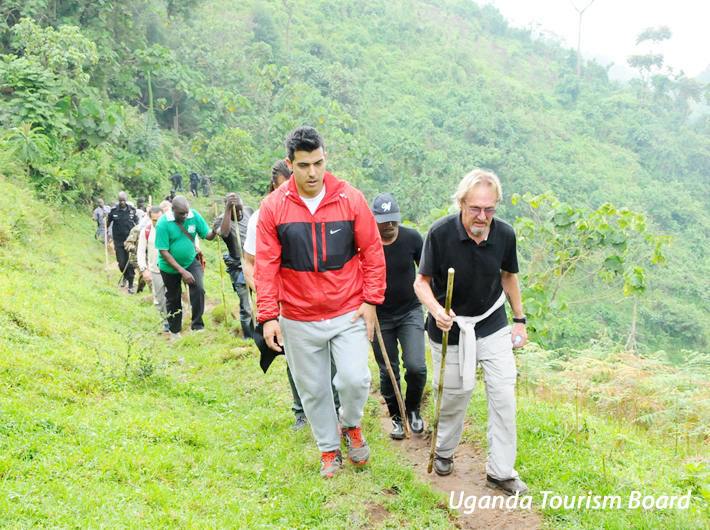 KAMPALA, UGANDA — A group of 40 football fans from the Spanish city of Barcelona visited Uganda in a privately financed safari to experience what the FC Barcelona Legends enjoyed when they toured Uganda last year writes SAM OKWAKOL.

In a press statement sent by the Uganda Tourism Board (UTB), Josep Antoni Roman, one of the organizers of the trip, is quoted to have said "The FC Barcelona Legend's visit inspired this group to visit the Pearl of Africa."

"In collaboration with Trips and Dreams and A.E. Ramassa FC Barcelona, we want to promote Uganda as a tourist destination having learnt about it after the Barcelona Legends visit to Uganda," Josep Romani said.

UTB's Chief Executive Officer, Stephen Asiimwe said, as part of UTB's tourism and promotional campaigns, the Board hopes to give the country great visibility and awareness, locally and internationally through initiatives like these ones.

The government through its agency UTB, hosted the FC Barcelona Legends from the December 8th to 12th, 2015 when it first initiated this campaign.

Asiimwe said it is not usual that one gets a return on investment so quickly considering that, it was only in December that Uganda invested in the Legends's visit.

"Sports and tourism are synonymous and many sportsmen are already looking at coming to Uganda for tournaments, promote local talent and promote the destination," he said.

The FC Barcelona Legends greats like Patrick Kluivert, Louis Garcia and Zambrotta, Carles Puyol, Edgar Davids and Ludovic Guily among others, were treated to gorilla tracking, water rafting and to all the tourism endorsement Uganda offers the world.

A football match between the Uganda Cranes and FC Barcelona Legends was played on December 12th, 2015 and was telecast live to millions, if not, billions of people in Uganda, Spain and to the rest of the world. Kluivert even scored a singular goal.

The World Travel & Tourism Council (WTTC) report 2015 underscores travel and tourism as an important economic activity in most countries around the world.

This primarily reflects the economic activity generated by industries such as hotels, travel agents, airlines and other passenger transportation services (excluding commuter services).

However, it also includes, for example, the activities of the restaurant and leisure industries directly supported by the influx of foreign visitors.

WTTC estimated the direct contribution of travel and tourism to GDP in Uganda to grow by 6.4% pa to Ush5, 548.1 billon (4.3% of GDP) by 2025. Currently, tourism is Uganda's leading foreign exchange earner.